Judgments & Bankruptcy: I’ve been sued. They got a judgment. Should I file bankruptcy?

Lots of people looking for information about judgments and bankruptcy are doing so because they’ve been sued and sometimes lost. If you’re one of them, take heart; the sky hasn’t fallen, even if you didn’t fight the lawsuit. Most judgments are dischargeable in bankruptcy; some aren’t. And, in a few rare instances, the question of whether the judgment can be discharged may be the subject of a lawsuit in the bankruptcy court. A simple breach of contract lawsuits are the most common, and these are the kind that commonly result in wage garnishments.

What is a judgment

Example: Joe fails to pay his credit card, and the bank sues him. Joe has no idea what to do about the Summons and Complaint, so he does nothing. The bank waits thirty days for Joe’s response, but gets none, shouts “Hallelujah!” and requests a default judgment (i.e., unopposed.) Judgment is granted, stamped by the court clerk, and now the bank can try to collect the money using several different ways. They try, for example, levying Joe’s bank account, garnishing his wages if he has a job, or doing a “till tap” if Joe runs a business. (That’s where the lender pays to have a sheriff’s deputy intercept incoming money and keep it for the lender. In the “for what it’s worth” department, not many creditors want to spend the $100+ per day to have the sheriff stationed there.) Now that the judgment is entered, is it too late for Joe to get help from bankruptcy? No, not at all. Bankruptcy neutralizes the judgment, just as effectively as if the bankruptcy had been filed prior to the bank’s lawsuit being filed in the first place. Joe’s attorney must take special care to get the right paperwork to the right people at the court where the lawsuit was filed, but if he does, the judgment essentially disappears. It’s no longer even on Joe’s credit report.

Judgments explained and when should you file bankruptcy 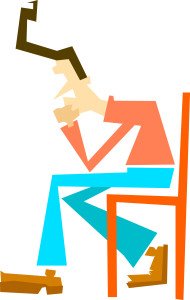 Let’s pretend for a minute that Joe is somewhat less than the honorable, conscientious client I almost always see. He’s been convicted of fraud (a crime), and he is ordered to pay restitution. Bankruptcy then won’t help. If he dodged a bullet in the criminal case, but the victim sues him successfully and the jury (or judge) finds fraud, then he has the same problem. His ex doesn’t have to worry about her judgment for support arrears being disturbed, because that’s not dischargeable. If the Department of Education catches up with Joe after a lifetime of having eluded his student loans, they can actually garnish his Social Security benefits to the tune of 15%. Make sure you tell your attorney about any lawsuits and judgments you know about. The best time to catch them is before your bankruptcy is filed, not, as sometimes happens, years later. There is often a hidden problem with judgments, though, if a lien has been filed or “recorded” as a result of the judgment. Tell me about any lien or judgment so that I can solve the lien problem at the same time as I deal with the judgment. They are two separate issues.

You’ll get the answers you need.

How long does bankruptcy take In San Diego ?
Scroll to top